You know what's uncomfortable? Getting flashes of staggering wearily along an underground tunnel, barefoot, with blood (that is probably not yours) slicking your hands and arms nearly to your elbows. Off and on, for about a week. This happened several months ago. (I still need to cement the timeline, because I did not clearly write it down when it was happening. Stupid me.) It is the closest thing to a vision I've had in recent memory...and last week I finally asked my Tarot deck if it could tell me what led to that scene. (Sorry, no photo of the spread. Six cards in the first row, and one in the second, is correct.)


I am operating under the assumption that part of me was doing things my waking mind was not aware of. So, after staring at the cards for a few minutes without writing any analysis, I wondered...did the deck just tell me I met some people while traipsing through the Otherworlds, possibly imbibed some substances, and then did something disastrously stupid? Upon looking at this again, a second interpretation struck me: that I was being naive, but then something huge happened (not necessarily my doing), and I learned enough to become a fledgling Magician. The shocking event probably was the death of my step-grandpa, who I had not seen in over a decade. I did not say this before, but around that time I felt prodded by Hades & Persephone, so I sat down, arranged my altar to open a line to them, and asked what they wanted. The answer was muddled and disturbing. The one clear image/sensation I got, I am not sure I am at leave to share. I am still puzzling over its meaning. Anyway, a few days later I learned that Grandpa had died...possibly the day I was spurred to reach out to those gods.

A pattern: I feel drawn to a deity, so I read about them. Days, weeks, or months of this later, I seek them out directly. They usually have something -- one thing -- to tell me, and will repeat it until I internalize it. With Athena, it was: Learn, Make. Guan Yin: Don't hate yourself so much. Hekate: change your circumstances now, or die like this, miserable. And so far, from Hades & Persephone: someone you hold dear in memory is leaving your world.
Posted by Sunstone at 6:24 PM No comments:

My partner and I go for walks in one of several places, usually once a week. It's a great time to chat without our usual digital distractions. We admire houses (if in a neighborhood) and keep an eye out for friendly cats. A lot of these homes have pleasant gardens. But it's surprising, how many fruits are left to fall and rot. We take a few, if we have space for them, stuffing our pockets with as much as they can hold. Today we discovered a fig tree -- the same fresh, ripe figs that are prohibitively expensive at the grocery store, when they're there at all. 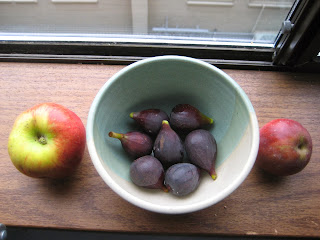 (We found a couple ugly apples, too.)

We don't scrounge like this because we're starving. Together, we have enough money for necessities. Letting the fruit rot is just such an appalling waste to us. Why keep a source of food, if you (general you) will not harvest and enjoy it? At least we benefit from others' negligence.


I treasure these small finds. They make me feel more connected to my environment, instead of a brain tottering around on meat-stilts like when I'm sedentary for an extended period of time. If you take away anything from my writing, let it be this: enjoy the unexpected gifts from your surroundings. Oh, and free food is nice, too.
Posted by Sunstone at 7:06 PM No comments:

[For some reason I did not post this soon after writing it, many months ago.]

Sprung from reading Lady Imbrium's recent energy notes, and the reply I made to her.

For me, at least, the two "realms" of sensing intermingle -- or that may be because I have a weak othersense. I think I am best with objects, actually, as opposed to life-forms. I have...sympathy for them. Example: as part of a display at the grocery store, someone once draped a Western-style saddle over a barrel. I was drawn over to it, curious if it was actually broken. I could only see a few loose stitches and a weak strap. There was a good sheen on the leather that spoke of much wear. In short, it was still a perfectly good tool with years left in it...and it had been put in a corny display, as a parody of itself. Almost a mockery. To me, the saddle itself was sad because it wasn't being used for its intended purpose. Of course, I may have been projecting. In general, to get an all-around (not just mundane) feel for an object, I have to incorporate nearly all my senses. Touch is most important. Lift it (if possible), turn it over in my hands, tap it, run my fingers along it. I tilt my head, listening, but not for something I can catch with my ears. Needless to say I sometimes get self-conscious in stores, as it can sometimes look a little, uh, intimate, or just plain odd.

I also fully believe that objects, especially complex ones like cars and computers, have a kind of soul. Also, just by spending time using or near a thing, you soak up its energy, and/or it soaks up yours. So it's no wonder you jive with your favorite car: it's familiar to you (on a mundane level), you've spent a lot of time with it, and it knows you. That's not to say that things lose their signature, necessarily...but perhaps it changes to harmonize with the entities around/within it? Just speculating on that last bit.
Posted by Sunstone at 6:51 PM No comments:

This happens to coincide with this week's Pagan Blog Project prompt.

Today I was browsing photos at Getty Images for potential BPAL icons when I hit this gem: 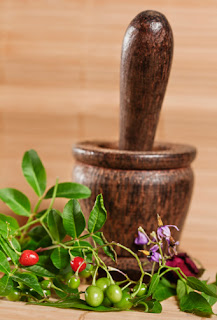 The plant in the foreground is a species of nightshade. It is poisonous. Turns out that this plant or extracts from it do have useful medicinal properties (pupil dilation for eye surgeries, for instance), but mashing it up with a mortar & pestle is probably a bad idea.

Message of the day: when selecting components of your photograph of mysterious herbal medicine, make sure the plants are not lethal. Unless your goal is to display a poisoner's arsenal.

(This is a rare instance of me acting like an elitist snob. Or perhaps just ranting. Where else can I act that way sometimes, if not on the internet?)
Posted by Sunstone at 7:12 PM No comments:

I've had this stretched, not-quite-itchy feeling between (and slightly under) my shoulderblades for the last two days. I think Bea's (kingofwands, over at Tumblr) realizations contributed to this. I also blame sitting slouched most of the time. Dusken's recent post over on Tumblr made the pieces fall together, though.

Oh hell, I'm just going to come out and say it: when it is often inexplicably uncomfortable to rest your upper back against a chair, Something May Be Up. (See also: my previous post titled Form, Shape and its follow-up.) The most recent resurgence may be the power of suggestion, but that doesn't explain everything.

I still don't trust myself. I'm human, damn it, no matter what pieces of soul-stuff came together to make me. I would like to know about those pieces, but...arghlgrgl. So. Much. Confusion. Self-doubt and skepticism are great in moderation, but too much, and you can never get anywhere.
Posted by Sunstone at 4:52 PM No comments:

That's what I do best, it seems.

This morning I took a walk in the nearby park. I itched to be outside and be alone. This park is...not good for the latter, so I was wary and distressed at the beginning that I wouldn't find a private spot. Subconsciously (not quite un-consciously), I drew upon The Deer to quiet my steps and sharpen my senses.* My mood started to improve when I found treasures: an evergreen cone in the shape of a rosette, a stalk of mint from a neglected garden, and a huge, soft pink rose petal that dropped from a bush in a neighbor's yard. I also saw hummingbirds! One female hovered within arm's reach. (From my bird book, I'm guessing an Anna's. Or perhaps a Rufous.) I saw two more, or maybe the same one twice, near where I picked up the rose petal. By the time a returned home, I was grinning in delight and awe at the small wonders of the world.

I used the mint stalk to cleanse the apartment of spiritual junk...or at least try to. I'm not sure how effective I was -- it only took a few minutes -- but even partial cleaning is better than none, and besides, mint smells nice. I also may have locked myself out of the apartment while pushing the accumulated crap out the window in the hall. Thankfully, my partner was inside (though asleep), so I was spared having to explain to my manager why I stepped outside my door with nothing in my hands but a mint sprig. Thus rescued, I rinsed the plant and hung it to dry for later use..probably as tea.

Lesson of the day: I work best spontaneously. I still don't know if my attempts at spell-work are effective at all, but stuff like this has not backfired yet. I am encouraged to continue.


* As mentioned previously, I sometimes feel deer-like. I have not decided what this means. But I did look at this picture the other day and think about the spotted one, "Oh look, it's me."
Posted by Sunstone at 1:24 PM No comments:

After I wrote the previous post, a friend privately pointed out to me that perhaps discontent with my real-life situation contributed to the feelings I was having. There is truth to that. But more interestingly, almost as soon as I made that post, the sensations of not quite fitting in my skin ceased for a time. They returned in a few days, but more muted than before. I am more grounded again. It seems that just admitting that stuff to the wider world cleared my head.

Lately, I have been trying to remove unhealthy things from my life. Examples of ways I am improving: spending less time in front of a screen, and thereby making that time more meaningful; sitting out on my apartment's tiny porch when the weather is nice; and making a conscious effort to keep the apartment semi-clean. These are small things, but together they contribute a lot to my well-being. Religious exploration is on hold for now. I will write when anything remarkable happens.

Posted by Sunstone at 4:48 PM No comments: 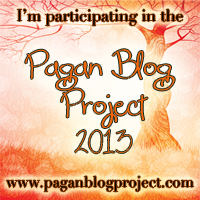